Lifting and orientation solutions specialist, Verton Australia, has appointed Adam Wallace as its National sales manager, in response to interest in the company’s R-Series load management system for crane safety. R-Series was developed in Queensland with state and federal government support.

Verton’s managing director, Trevor Bourne, said that Wallace joins the company after working for global equipment manufacturer the Liebherr Group, where he was Queensland sales manager.

“Adam is a highly experienced sales and business development manager and we look forward to his contribution as we continue to see strong national and overseas interest in the R-Series,” Bourne said.

Verton has developed the R-Series for all crane operations with a remote-controlled load-management system that eliminates the need for human held taglines to control suspended loads, keeping people out of harm’s way. The R-Series won an Australian Good Design Award in the Engineering Design category and has recently been featured in the Network Ten series Australia by Design: Innovations.

The R-Series is manufactured in Brisbane and is already supplied to national crane hire company Universal Cranes and mining services company MACA Interquip, with more national and international supply contracts under negotiation.

This year Verton was selected to take part in the PortXL Port and Maritime Accelerator programme in Rotterdam, Netherlands, where it established partnerships with global marine contractor Van Oord, international heavy lifting and transport specialist Mammoet and wind turbine supplier Vestas to further develop a new, safer lifting method for installing wind turbine blades. The deal was the largest in the four-year history of the PortXL programme.

“The R-Series effectively addresses a key safety issue when maneuvering large lifts into place and will be instrumental in the constant striving to make construction and industrial sites safer places to work,” Bourne said.

“The device significantly improves efficiency and productivity. We have had a big year with keen interest in Europe and the United States. Our aim is to have the R-Series used all around the world.” 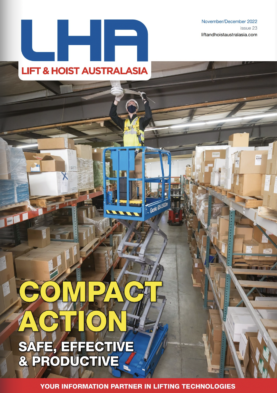