As Australia and New Zealand poke their heads out from the coronavirus slumber, we’re going to see a decidedly different world than before, says Justin Boehm – LEEA

One of the biggest changes we’re seeing has been due to the enforced change in working arrangements – the working from home ‘phenomenon’. Since joining LEEA in 2018 I too had to adapt to this new way of working. Having spent my entire working life in an office environment, it was a big step. Yet communications tools like Skype for Business, Teams, Zoom and WhatsApp brought the UK-based team closer to me that I thought possible.

For many years we’ve heard that productivity and efficiency was key to greater economic growth and a lift in living standards. Today we’re seeing figures coming out showing that COVID-19 has put a significant dent in the broader economic environment. However, at a micro level, firms have adapted to a new norm allowing the coveted but rarely used ‘flexibility to work from home’.

Recently the CEO of Worley* announced that a major portion of its workforce will not be going back to traditional offices. They’ve seen the benefits of remote working and have also seen the benefits of opening up talent pools. Do jobs need to be wedded to geographic locations if they’re engaged with their teams?

Many firms have seen that staff can perform as effectively working remotely, compared to being in the office and generally with less distractions. The forced change has bought faith to once reluctant managers that their team can be trusted. This has bought about a change of thinking – the downsized office, adoption of online engagement with staff and clients and giving office workers greater flexibility to work hours that suit them. These changes could have the potential to bring a wave of hyper productivity to the future workplace.

Another benefit over these past several weeks has been a distinct reduction in traffic. Anecdotal stories from a number of members has highlighted the efficiency gains of the coronavirus restrictions through reduced congestions. Construction of many major projects has streaked ahead, as deliveries arrive as scheduled, particularly in the usually congested major capital cities. Over the past few years many delivery businesses decided that, due to congestion during the day, it was uneconomical and changed to nightly deliveries. Paying overtime rates for drivers was cheaper than burning hours waiting in traffic. This could all change again in a post COVID-19 world.

Everyone living in the ‘burbs’ can attest to the drag of bumper to bumper traffic. Any business with service technicians understands the cost of lost billable hours or missed jobs caused by traffic. A number of studies into the correlation between congestion and working from home have suggested that the average person works 1.1 days a week from home. If this number raised to five days a fortnight the gridlock and peak hours would be significantly reduced. Boosting productivity and giving business a more efficient workflows and schedules.

For LEEA members who perform onsite lifting equipment inspections and repairs, being onsite when the customers expect is all part of their high level of service.

*Worley is a worldwide team of consultants, engineers, construction workers and data scientists working to solve the complexity of the energy, chemicals and resources sectors. 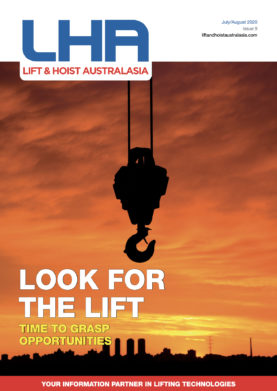