As a nine-year tenure on the Lifting Equipment Engineers Association (LEEA) board concludes, it’s time to reflect and give new leadership our full support.

I remember the size of the task that faced us nine years ago; it was like standing at the foot of a mountain. Our end goal, as it is today, was to make LEEA the industry standard for procurement and use of all lifting equipment services in Australia.
First, we had to tell more people what LEEA was and what it does. It was no small feat and I always felt that it was going to take the best part of my career to complete our mission. It was also going to take a broader commitment and widespread support from peers and end users alike.
Of course, my journey with LEEA started long before that; when I was still in my early twenties. I was travelling on a gap year and decided to take a break to do a course at the association’s head office in Huntingdon, not too far from London where I was staying. There was a gravitational pull given that the family business was in the lifting industry and, although there were no Australian members at the time, my father, Steve, had spoken of LEEA and encouraged me to check them out while overseas.
It was a significant moment given that it exposed me to formal training and put into perspective that no such thing was available in Australia at the time. Fast forward a few years and I was invited to join the board as a 26 year old, taking regular trips back to Huntingdon for meetings and subsequent training.
Over the years, the rallying cry has increasingly been heard to the extent that industry has elected new blood into the important role of LEEA International/Regional director – Australia. Handing the baton to Steven Flint, founder and CEO of The Rigging Shed in Western Australia, is somewhat bitter sweet. Steve has an incredible 34 years of industry experience to contribute and will bring a new perspective to the role, which is always a good thing. But I’m just as passionate about the work of LEEA in Australia today as I was nine years ago, and I’ve still got much more to give to this important cause.
The good thing about beginning a tenure on the board today is that there is momentum to build on. A launch pad has been built. Board positions at not-for-profit and trade associations can be scoffed at because they require people to put in a lot of unpaid work, away from their busy day jobs. But, as I’ve said before, it’s important work and the payback can be great in contributing to advancement of an entire industry. In the case of LEEA, it’s also a case of supporting a movement that is trying to make lifting safer so everyone goes home to their family each night. That’s incredibly rewarding work.

Roadmap from 2020
So where is LEEA in Australasia today? And what are the challenges and opportunities that await?
In short, LEEA in Australasia is a work in progress. The rocket hasn’t taken off yet. It’s true that we enjoy a strong reputation in key Australian and New Zealand industries, with oil and gas, mining and construction perhaps the standout examples.
However, this is a sprawling part of the world and there are many more sectors that rely on our members’ technologies, solutions and expertise. Let’s acknowledge the reality that we are some way off being the undisputed industry standard. Sometimes members are too quick to point that out and less willing to acknowledge the start point or the progress that has been made. Of course, there were times when I demanded more from LEEA and was forthright about how much more the association could be doing for members in our region and in its bid to gain wider membership.
But board members must choose their moments carefully. Regional representation isn’t about campaigning for higher status than another marketplace or suggesting that one local cause is more important than another. At trade associations generally, too much time is wasted, and energy lost by members feeling that they are more important than someone else. The spirit of trade associations is in their collectiveness – up to a point.
Integral to LEEA’s roadmap from 2020 is Justin Boehm, our representative in Australia and New Zealand. Justin’s appointment was a big win during my time on the board; I remember gaining unanimous support for the appointment of an Australia-based LEEA employee. It’s been uplifting since then to work alongside him and act as something of a sounding board as we’ve navigated the immediate and longer-term issues that required our attention.
But Justin remains one man. We must continue to support him as he campaigns on our behalf. Over the last nine years we’ve seen the membership in Australasia grow from 40 to almost 100 at my last count. We’re also noticing an increase in the awareness of LEEA accreditations and training across Tier 1 contractors.
It can be a case of strength in numbers when trade bodies are trying to gain traction and I definitely felt more empowered to make a positive difference as more and more companies became LEEA members. It also served as an endorsement that we were doing the right things and it’ll continue to be a reliable barometer moving forward. I know Justin is grateful for the support as he executes our strategies.
As the marketplace continues to support LEEA and challenges it to deliver the best possible service, I anticipate that more opportunities will emerge to promote the association locally.
If it wasn’t for a coronavirus-enforced postponement, we were planning to further unveil plans to stage a lifting equipment trade show, akin to LiftEx, here in Australia. It would have been a real statement of our intent for the region to operate more autonomously.

The push for more regional representation
I make no secret of the fact that I suggested to LEEA that it appoints a regional board that doesn’t have to go back to the UK for approval on Australasian matters and I hope Steve continues to campaign for this. While the majority of LEEA membership is based outside of the UK, the bulk of discussions and decisions are made there. I’ve always acknowledged that LEEA must honour certain compliance and governance issues as a UK-registered entity, but I’d like to see us get to the stage where we have stronger representation on our own shores. I think that only then will membership numbers grow significantly, and broader recognition will be achieved. The same is true of New Zealand, whose members will now join local quarterly technical meetings.
A one size fits all approach doesn’t work anymore. There was no better example of the importance of this than our respective governments’ responses to COVID-19. Here, the government’s JobKeeper Payment scheme helped keep more Australians in jobs. This was different to the UK, where employers could furlough employees. The systems were markedly different; one was about keeping people at work and the other about covering businesses who wanted to send them home.
While we were still all working down here, the UK had basically come to a stop. This affected training, access to support and it had a flow on impact there. COVID-19 is an extreme example but trade associations must find a way to serve all members in such instances and regional boards is just one of the many ways this can be achieved.
I reiterate the importance of LEEA’s growing Australian membership backing our new board representative but holding the association to account. I remain passionate about the goals we’ve been striving towards and will continue to support Steven and Justin – and CEO Ross Moloney over in the UK.
As the last nine years prove, serving a trade association is very rewarding but challenging work. When the day job is pulling you one way, LEEA might be pulling you another. It’s often a case of being damned if you do and damned if you don’t. Without the backing of my family, friends and industry colleagues I may have thrown the towel in long ago and I thank them for their support. 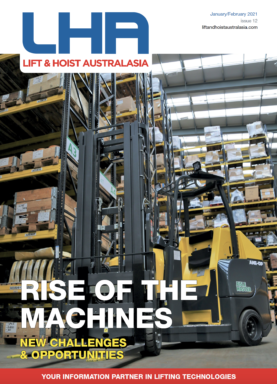