Out of sight, out of mind – until now.

The annual awards dinner held recently after the opening day of the Lifting Equipment Engineers Association’s (LEEA) LiftEx trade show provided the first opportunity for many to watch the Think Lifting video. The film is a collaborative work between LEEA and Lift & Hoist International (LHI) magazine, and is intent on promoting the lifting industry to young people, indeed, a wider audience.

“Can you solve a problem?

Or find a solution?

It is a strong opening that captures the very nature of the lifting industry as a problem solving marketplace. Further, it applies it to ambitious people who might be considering a challenging, diverse career path. However, the line that really captures the problem with our industry comes later:

“It is everywhere, but sometimes hidden from eyes.”

The biggest challenge for the Think Lifting campaign is that people don’t think about lifting. We’ve got to change that—quickly.

It’s a niche industry, which is part of its charm, but even when folks do consider it, they envisage the tower cranes they see on the city skyline. They don’t think about the world beneath the hook or the importance of connecting lifting equipment to loads. It’s a grim reality that we have failed to engage the world in what we do, even though, “Lifting improves, protects and saves lives,” as the video highlights.

It’s not an easy task. I asked all of my staff what they do for a living for a series of short videos we were producing for our own purposes, and everyone said something different. That’s not to say the team isn’t in tune with what they do every day, but the work is so diverse and perspectives vary. After all, how do you explain that what you do is somewhere between the hook and the load? It’s the bit nobody thinks about. Even my wife doesn’t know what I do when I go out every morning. “Something to do with cranes,” she might say.

The digital age has given us an opportunity to change all that. The Think Lifting video demonstrates how we can present our sector in a way that reaches the hearts and minds of people at impressionable ages. When I was sat at the LEEA awards dinner watching the big screens, I immediately thought of the teenagers and younger people who will more easily engage with something in this format. The beauty of video is that words, sound and pictures can all combine. In less than three minutes, viewers see lifting as it relates to fossil fuels, aviation, offshore, space, rescue, travel, entertainment—and more.

The industry is desperate for Think Lifting’s legacy to be that the next generation actually Thought Lifting. But it’s a big ask. Take our company, for example; our youngest employee is 18 years old but the eldest is 63 and the average is 40 something. What’s worse is that we have a young team compared to many out there.

We found our most youthful employee via his father, who is a long-term client, and he approached us about opportunities. This seems to be how it goes with young people; the pathway is winding and random. I could put at least another four juniors on the books tomorrow—if I could find them. We’re all hoping that’s where Think Lifting can help.

Where would we be without lifting?

What should make our promotional efforts easier is that lifting is global. “Without lifting, we couldn’t take the train, sail or drive,” anywhere in the world. “Without lifting, we couldn’t take to the skies,” regardless of how advanced the engineers are. “It was lifting that put Curiosity on Mars”; without it, the project would never have got off the ground.

True, here in Australia we have a shortage of skilled people in most industries, but it’s pandemic. Tell me somewhere that’s different. I reckon at least 75% of the people in our sector are over 45 years old. I’d go further and say that the percentage is higher in terms of the people with the really high technical knowledge. Throw that scenario forward another decade and consider the consequences. We can’t have an industry of people who only deal with products and pricing; we need the experts, lift planners, and supervisors.

With so much at stake, we need to get it right. Yes, the video is cool. It even helps us to, “…dream, aspire and to soar!” but we’ve got to follow it through. If we sit down a year from now, play the video, and all applaud it again without reflecting on tangible progress, we’re dumber than we all look dressed up to the nines. An education campaign must follow. And I know efforts to this end are underway. In fact, LHI magazine was filming more material for another video at LiftEx 2019, in which thought leaders and stakeholders in the industry were promoting their passion to those completing education and considering career paths.

Some of us have harnessed the power of technology and video to promote our own companies but it’s short-sighted to stop there. This is no longer about selling another shackle or a bunch of wire rope slings. It’s become greater than getting another order for fall arrest equipment or ratchet lever hoists. Gone are the days where our businesses only operated to make profit. We’re now the last line of defence for one of the most underrated industries on earth. If a greater percentage of people don’t start to Think Lifting, we’re going to hit a crisis we can’t recover from and it’ll happen sooner than people realise.

End users need to wise-up too. The investment that goes into some of the markets that rely on our expertise and equipment is staggering. I’d like to see greater emphasis placed upon us though. Of course I understand why someone would be more impressed with a big container ship itself than the lifting gear that loads and unloads it, but we can’t have one without the other. If there’s nobody to rig the loads, an industry stops making money.

Imagine the impact it would have if certain high profile industries started to Think Lifting themselves.

It’s not only the youthful we need to attract

LEEA is doing its bit, not just in terms of young people. As the association recognises, we need to open more gateways to our industry generally. I like the 75:75 Military Transition initiative for instance. Working with the Careers Transition Partnership, who will find 75 recruits from the military, LEEA will provide free training, either on current courses or on standalone courses for military personnel. It is sad to think that people come out of the forces with 10 or 20 years of experience and none of that can be translated across to civilian work skills.

A word of warning, however: it isn’t always feasible for a company to meet the salary expectations of someone who has held a senior military role, particularly if they have to join at a junior level. Sometimes we have to be careful to make sure there is connectivity between the formation of such strategy and the point of delivery. (A fellow blogger summed this up in his own commentary recently by saying we need to achieve “legacy” not pay “lip service”.)

In conclusion, I challenge the industry to act. Today. Technology is in the palm of all of our hands and, in the Think Lifting video, we have the incentive to use it. Let’s set LiftEx 2020 as a time to reflect and measure our progress:

Who have we attracted to the industry off the back of Think Lifting?

What end users are actively campaigning on our behalf?

What education facilities are pushing their cohorts towards lifting?

When can we forecast that the average age of an employee in our industry is 30 something not 40 or 50 something?

Before it’s too late. 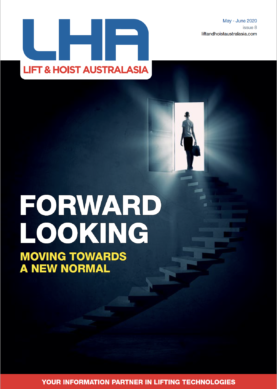