Elevated work platforms (EWPs) remain the safest and most productive method of working at height. However, manufacturers continue to find new ways to protect workers and reduce risk. Dan Jenkins reports on the latest trends.

Australia has a robust health and safety culture, which drives a lot of safety initiatives in the wider region. The Elevating Work Platform Association plays a strong role in bringing together manufacturers, rental companies and contractors to address key issues.

Malcolm Early, vice president of Marketing, for Skyjack, says, “Industry groups have recently suggested possible circumstances, conditions, and operations that might result in inadvertent contact with obstructions and consequently an entrapment hazard,” he added. “As a result, a form of secondary guarding is now being requested on scissor lifts and vertical mast lifts by some equipment users.”

This close collaboration was driven by the industry after identifying a cluster of incidents involving scissor lifts, then working together to address this issue. “There have been a number of incidents involving scissors,” confirmed Early. “The tier one contractors have been instrumental in calling for secondary guarding on scissors and that has translated into rental companies supplying tier one contractors demanding such measures.”

One of the most high-profile incidents occurred in January 2020, leading to the death of a scissor lift operator working at a factory in Brunswick. Health and safety body WorkSafe Victoria reported that the 37 year-old man suffered fatal injuries after striking a steel truss as he was elevating the scissor.

Skyjack, which has a facility in Eastern Creek, New South Wales, recently launch its Secondary Guarding and Lift Enable (SGLE) system for use on scissors lifts. Both the joystick and tamper-proof secondary enables must be activated for the platform to lift – the release of either automatically stops lift functions immediately. The secondary enable button is not used for lowering the platform or for driving; those functions remain joystick-enable only. SGLE is suitable for all Skyjack scissor lift and vertical mast lift models and is available as an optional direct factory install or as an aftermarket accessory.

Skyjack’s Early says, “The ergonomics are such that the operator’s body is kept in an upright position and away from the railings; mitigating the risk of entrapment.”

In addition, Skyjack also approves the use of the OverWatch system, which works in conjunction with SGLE. Designed by Equipment Safety Systems Pty Ltd (EQSS), OverWatch detects the operator’s position and movements, in relation to the EWP’s direction of movement. It uses a combination of technologies including LIDAR, inertia measurement and algorithms to determine when an operator is in danger. It is also smart enough to detect the difference between an operator ducking through a doorway and one being crushed by an overhead obstacle.

“Skyjack recognises there is no single best solution to help reduce the risk of entrapment, and much depends upon a specific job site risk assessment to determine the most appropriate solution for any particular need or application,” added Early.

Based in Keysborough, Victoria, EQSS has also won approval for OverWatch for use on Genie, JLG and Snorkel scissor lifts. Snorkel also provides a trigger guard solution, which the company fits as standard to all new Snorkel lifts that have an enable switch-operated joystick.

Matthew Elvin, CEO of Snorkel, says, “The trigger guard fits directly onto the joystick and provides an additional level of protection over the enable switch to prevent involuntary movement, without affecting normal operation of the controls.”

The trigger guard is also available as a retrofit solution for legacy Snorkel electric and rough terrain scissor lifts, as well as any other Snorkel models with an enable switch-operated joystick, including some electric boom lifts, towable booms and mast booms.

Last year, Genie rolled out its Lift Guard Contact Alarm for slab scissors and vertical masts in Australia and New Zealand. It is designed to alert operators and those around them to potential hazards when working at height. It is available on Genie GS slab scissor lifts, as well as Genie GR and GRC vertical masts.

An optional electronic secondary guarding solution, it activates when an obstruction makes contact with what Genie describes as an “activation whisker” mounted to the EWP’s guardrails. When the system is activated, all machine motion will stop. An alarm will sound to alert the operator, who will then need to acknowledge the alarm by releasing the function enable and centring the joystick.

Alerts continue until the machine is shut off or the activation whisker is returned to its stowed position. Lift and drive functions can continue at reduced speeds.

The Genie Lift Guard Contact Alarm system is now available as a factory-installed option on slab scissor and vertical mast lifts. A retrofit kit is available to allow for compatibility with Genie Smart Link system-equipped scissor lifts and vertical masts, which covers machines produced since 2011.

Chinese manufacturer Sinoboom has developed what it describes as an “anti-pinching device” for boom lifts, to help protect the safety of operators. As with similar devices from other OEMs, this works when by triggering the emergency stop if the operator’s body begins to press down with force on a bar fitted above the controls.

The company, based in the Changsha region of China, echoes both Snorkel and Skyjack’s comments that demand is driven by contractors. A spokesperson for Sinoboom said: “In some application scenarios, the leaser requires the EWP to be equipped with an anti-collision system to protect personnel from the risk of squeezing during operation.”

Snorkel was at the forefront of anti-entrapment technology. In 2015 it launched Snorkel Guard, becoming the first OEM to fit secondary guarding as standard to its boom lifts, worldwide. It still also provides a retrofit solution for older boom lifts.

Designed by Snorkel’s in-house engineering team, the Snorkel Guard system features a spring-loaded rail mounted above the platform controls, which cuts-out machine operations when pressure is applied.  If the operator is able, they can restore power using the override switch in the platform. Alternatively, the ground controls can be used to lower the platform.

Along with Lift Guard, Genie has also taken a different approach via its Smart Link software. Available for Smart Link-enabled Genie scissor lifts and vertical lifts which have load sensors, it includes a function which enables machine operators to adjust the maximum platform height restriction. This provides an added layer of secondary guarding in applications with restricted access, such as areas with low ceilings or containing overhead obstructions.

Its two most recent safety features include the Haulotte Activ’Shield Bar 2.0, for reducing the risk of injury and death due to crushing; and the Activ’Lighting System, designed for safe loading and unloading of machines from trucks at night time or in other reduced light conditions.

Snorkel has a unique presence in this region, with an assembly facility in Levin, New Zealand established more than 40 years ago. In Australia, sales, service and spare parts is provided by Ahern Australia, with four branch locations in Sydney, Melbourne, Brisbane and Perth.  Ahern is owned by Don Ahern, who also owns Xtreme Manufacturing, the majority shareholder in Snorkel.

Snorkel sees several strands driving safety improvements. “One of the major safety trends for elevating work platforms is for secondary guarding to be provided on all types of EWPs,” said Elvin. “Specific industries and regulators are also looking to EWP manufacturers to give greater consideration to operator controls in the design of new equipment, specifically with a focus towards achieving some degree of commonality between brands.

“The MEWP industry has taken this onboard globally with the recent publication of ISO 21455, which deals specifically with the placement and direction of operation of MEWP operator controls.  Australian industry experts were involved in the development of this new international standard from the outset.”

Looking specifically at Australia and the wider region, Snorkel sees major contractors playing a key role in demand for enhanced safety features on scissors, masts, and booms. “The health and safety of EWP operators is the key driver of the increased demand for safety features on elevating work platforms within the Australian market,” said Elvin. “This is mainly being driven by larger contractors and mining contractors, through the rental companies from which they hire EWPs. Secondary guarding has been one of the most highly demanded safety features, and contractors are now looking for this on scissor lifts as well as boom lifts.”

While manufacturers have worked hard to enhance the safety of EWPs, there is still more to be done.

The new Snorkel 2100SJ, the world’s largest self-propelled telescopic boom lift, will include a number of new features that aim to drive new standards of operator safety.

For restricted operations, Snorkel has developed a simple dual zone management system, which is based on jib boom extension, rather than on the platform load. This delivers a simple, single envelope – when the 9.1m jib boom is retracted, the operator has an unrestricted working envelope of 454kg, but the when the jib boom is extended, the platform capacity is restricted to 300kg.

While this system ensures a much simpler and user-friendly experience for the operator, Snorkel has also added haptics to its upper controls. This means that, as the operator nears the boundaries of the working envelope, the joystick begins to vibrate, with the vibrations becoming stronger the nearer the operator gets to the limit of the machine’s capabilities. This also minimises the risk of sudden stops when working at height.

Finally, for safer loading and unloading, the Snorkel 2100SJ is equipped with a removable RF-controlled lower control panel designed to be operated remotely, either tethered or wireless. The remote-control panel has all machine functions, including drive, and the panel can be easily stowed inside the turntable where it can be used as conventional fixed lower controls.

In the future Sinoboom predicts that we will see smarter safety features, as well as more widespread use. A Sinoboom spokesperson said: “Some intelligent early-warning devices will be more and more widely used in EWPs to help improve the operator’s perception of the surrounding environment, so as to avoid hazards and danger.

They added: “Safety is the fundamental factor, while environmental protection and efficiency are the pursuit of human social progress.”

Skyjack continues to develop safety technology, but in a way which doesn’t impair the capabilities of EWPs. “In addition to the systems Skyjack offer, we continue to explore a number of other options,” added Early. “In doing so we are mindful that there is a requirement to keep the functionality of the machine and the ability to work at height without obstruction. Equally, different sensors have differing short comings.

“The point being  that at this point there is no single best solution to help reduce the risk of entrapment, and much depends upon a specific job site risk assessment to determine the most appropriate solution for any particular need or application.”

While manufacturers continue to reduce risk for EWP operators, safety has to be embedded in the culture of the companies who own, hire and use these work platforms. Without a strong health and safety ethos, supported with high quality training, then injuries and fatalities will continue to occur. The advent of smarter machines may one day eliminate human error entirely, but we are not there yet. 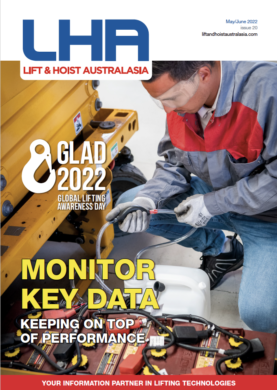